Think about the mood of your fellow Americans. Better yet, test them! We’ve started a movement among Christians. It has many components. One is to test the mood of those who are not functional  Christians. Our database is over 1,000 people from all over the country. 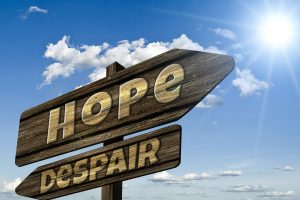 Here’s what you do:

Here’s the real story. They are hopeless. What does that mean for Christians? The timing is becoming perfect for people to hear the good news about Jesus!

Think about this: When did God send Jesus? Since He’s God, He could have picked anytime He wanted. The time He chose is, Israel, under foreign occupation! How would you feel if the most feared army in the world was all over your nation? Remember, these guys practice crucifixion! How would you like these people in your village. In your city. Everywhere? Add to that, the promise you live by: That God gave this particular land to you and your people. Then add to that the reality that these Romans took a good chunk of your money through heavy taxes and sent that money to Rome to support a pagan emperor!

How would you feel? You would feel…hopeless! No wonder the apostles could call Jesus, “The HOPE of the world.” No wonder, 1 Peter has a verse that says, “Remember at all times to share the HOPE that is within you.” Their world was ripe for HOPE. Our world is ripe for HOPE.

When you hear bad news, see newscasts of horrible acts, read about tragedies, ask these questions: